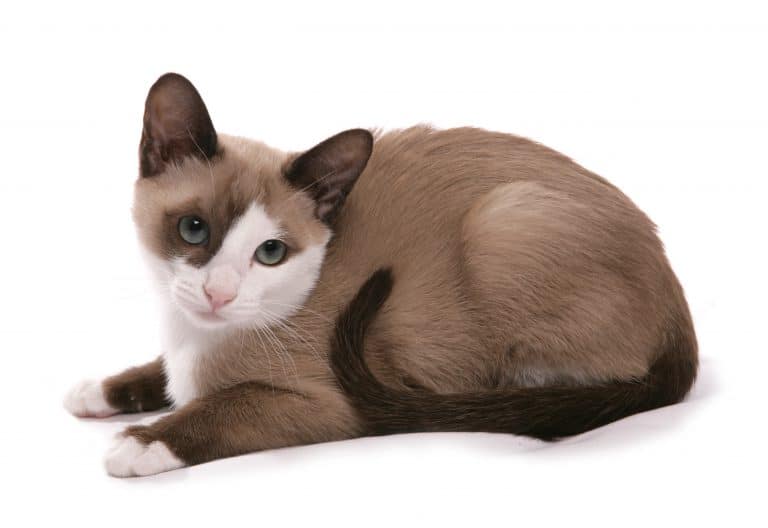 The Snowshoe is a medium sized short hair cat with beautiful blue eyes. A very friendly breed, social and interactive, who love to spend time with their humans and also get along very well with other pets. The Snowshoe will delight and entertain you, being very playful and intelligent. They are easy and fun to train for harness and basic tricks. In general you will never be lonely with a Snowshoe in the house!

Still a rather rare breed on a world wide scale the Snowshoe is a new breed to Australia, not seen here until 2011, and gaining Breed Recognition from CCCA, ACF & ANCats during 2011-12. There are currently only three registered active breeders of the Snowshoe cat in Australia.

The Snowshoe is a very companionable cat, forming a close bond with their family members. They know what you are going to do long before you know it. They like to be near you, but unlike a dog, they prefer to lead you rather than to follow you. The resulting personality is unique and being ‘owned’ by a Snowshoe is something you have to experience to appreciate. Once ‘owned’, you will probably never want to be without one. The Snowshoe tends to be shy with strangers however their natural curiosity soon has them making friends all around!

The Snowshoe personality is as unique as their appearance and is never boring. Generally a highly interactive cat, they may talk to you with their soft, melodic voice. Almost all are inquisitive and active, offering many hours of delightful entertainment and a cat’s lifetime of affectionate companionship. The temperament is described as ‘bombproof’ and indeed little seems to faze them. They love interactive play with their owners. Fishing rod toys are a great favourite, as are climbing frames, especially those that include a tunnel or hammock. They are quick, intelligent, and love human company. They also readily accept other breeds of cats, dogs and of course children! The Snowshoe is truly the ideal all-round family cat.

It is very important to realise that the Snowshoe is a specific cat breed and not just a set of markings. It should not be confused with either the Siamese or a Siamese crossbred carrying white markings. All genuine Snowshoes in Australia will be accompanied by a set of Registration papers authenticating their breed heritage.

An exceptionally pretty cat with a Pointed coat pattern and lovely Blue eyes, the Snowshoe generally, but not always, has white on paws and face.
The Snowshoe comes in four specific coat patterns:

This combination of blue eyes, pointed pattern and white trim makes the Snowshoe unique amongst shorthaired cats. The traditional Classic pattern is most striking, but very difficult to achieve. Some breeders describe Snowshoes as being ‘as different as Snowflakes’, each kitten showing its own distinctive pattern, each having its own unique appeal. The coat is a single layer with no evidence of an undercoat and is usually smooth to the touch. 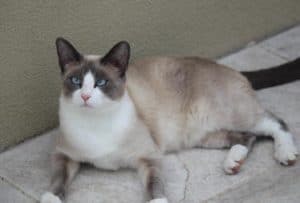 The Snowshoe is a medium sized cat. The cat is well balanced overall. It is firm and muscular, deceptively powerful and agile. A long cat, it has the appearance of a runner rather than a weightlifter. Males generally weigh approx 4 – 6 kg & females 3.5 – 5 kg. The Snowshoe is also renowned as a particularly healthy cat with no known heritable defects. 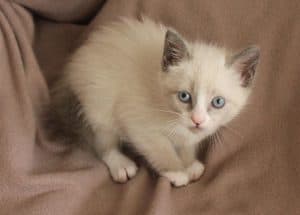