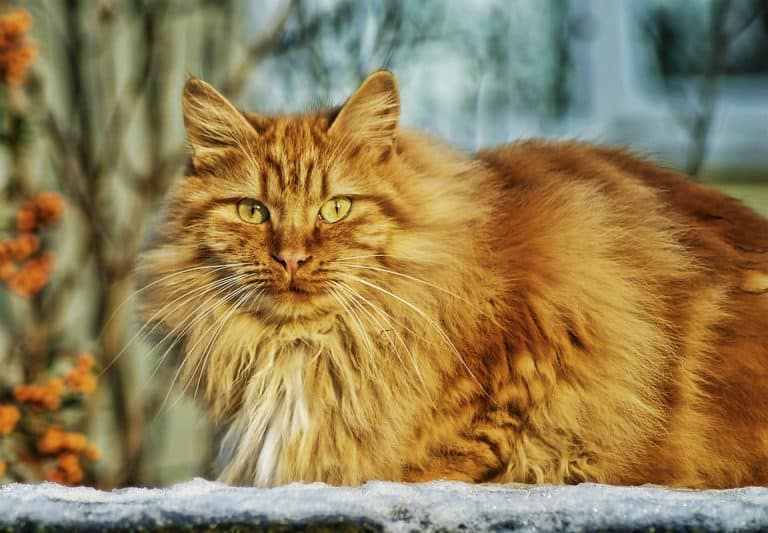 The Norwegian Forest Cat enjoys being with people and other pets and is excellent with children. They are very patient animals and are not stressed easily. They are very intelligent and have a natural curiosity.

One thing that is an absolute necessity if you own a Norwegian Forest cat is some kind of climbing device. They like to be up high to survey their kingdom. A climbing tree is perfect and they will spend endless amounts of energy going up and down doing all they can to impress you with their athletic abilities. 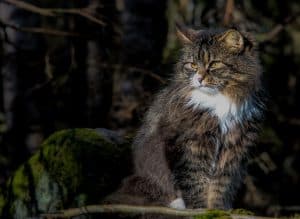 If you are looking for a cat that will be your best friend, then the Norwegian Forest Cat is the cat for you.

A Norwegian Forest Cat in full coat is a sight to behold. Each time you touch their spun-silk soft coat it is a delight to the fingertips. NFC’s have a double coat of fur in the winter. There is a seasonal change in their appearance, when they shed the thick undercoat. The outer coat resists water. Males and some females will develop a mane. Norwegian Forest Cats have a triangular face with a straight profile “ski slope nose”. Their ears usually have tufts of long hair, as do their feet. The NFC holds its long fluffy tail up as if it were a beacon of light from a lighthouse… it seems to say, “Hey, I’m here”.

Norwegian Forest cats chirp similar to racoons in the wild. They have a bird-like sound that they make when talking to each other. They don’t meow unless they are trying to tell you something. Rather quiet compared to many cat breeds.

Grooming is not difficult on a Norwegian Forest Cat. Although they will mat if their coat is neglected, they tend not to mat as much as some other longhaired breeds. A simple combing of their coat a few times a week will keep it looking lovely and full. 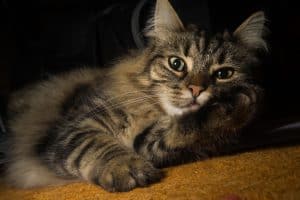 Although the Norwegian Forest Cat (NFC) is a relatively new breed in Australia, it is a very old breed in Scandinavia, fashioned by nature, in the forests of Norway. NFC’s are found in Norwegian fairy tales and mythology. Enchanted cats of the forest that could disappear at will. These are the cats that explored the world with the Vikings, protecting the grain stores on land and sea. The breed was close to extinct until Carl-Fredrik Nordane organized a breed club to preserve the Forest Cat. 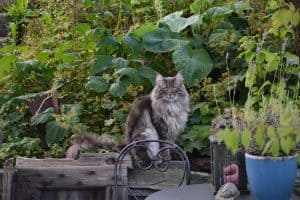 The Norwegian Forest Cat is a large muscular cat, a slow-maturing breed, taking 4 to 5 years to reach full size.
The NFC’s eyes are one of its prettiest features; they positively glow. They are large, expressive and almond shaped and the outer corner of the eye is tilted up to the base of the ear. Each time you see a NFC it is a feast for the eyes, with their bright green-gold eyes, long flowing coat, sweet-expressional faces and jaunty ear and toe trimmings. 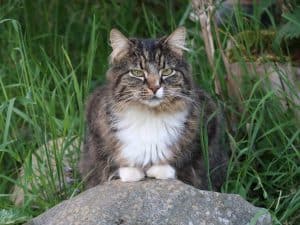