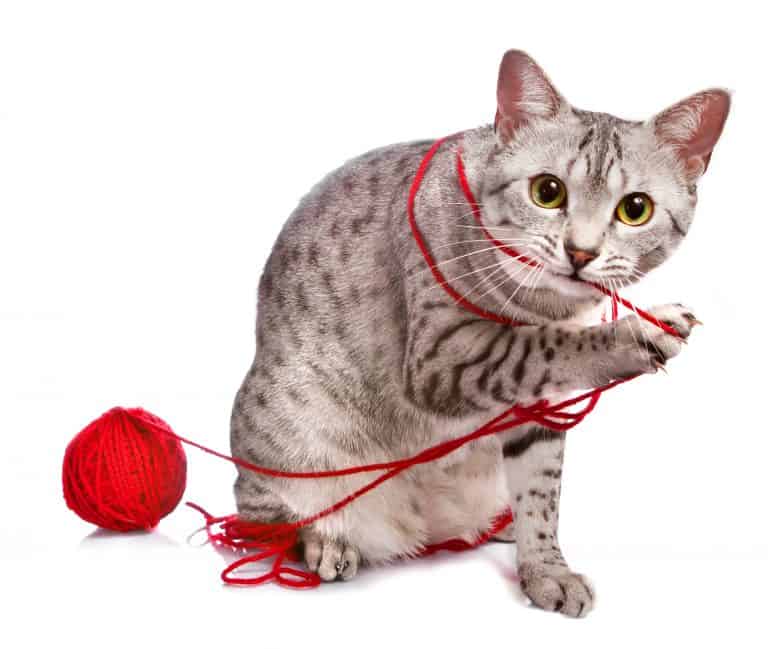 The average Mau is quite clingy to his owners; some will take to only one family member, while others will take over the entire household. Whichever way it goes, once the Mau has bonded, he is your lover for life and will actively participate in anything you do, whether you want him there or not.

While the breed standard calls for an even-tempered feline, many Egyptian Maus are anything but that. It tends to be the Egyptian Mau’s nature to be fearful and gun shy, hiding under furniture when company arrives; breeders must make great strives to overcompensate for this with a lot of early, hands-on socialization during kitten-hood. Many Mau kittens need this treatment to become loving, well-adjusted cats. Those cats who do not receive this care are known to growl, scratch, and hiss when a new or uncomfortable situation comes about. The cats that do receive proper socialization, however, make the best living companions.

As the Egyptian Mau is incredibly intelligent, they have been known to break open closed doors by either slamming against them or twisting the doorknob. Privacy is a rare luxury with a Mau in the house, and often you will hear them chortle a “welcome home” song, a “let me in” plea, or just a general speech about their day.

The proper Egyptian Mau should look proportioned with an overall medium size. The face should be medium length, with a rounded muzzle. The ears should rest well back on the head with sufficient space between them. Adult males may also show jowls.

The feet of the Egyptian Mau are small and oval. There should be five toes on the front and four long toes on the back paws. The shoulder blades should be visible and stand higher than the back line. Loose skin on the stomach, or “belly flap,” is highly desirable. The tail should be medium at the base and slightly taper as it extends outward. 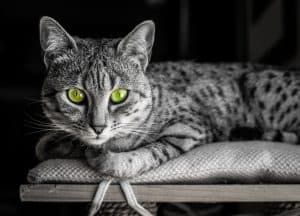 The Egyptian Mau showcases a scarab, or an “M,” on their forehead. The scarab turns into dorsal stripes at the back of the head and flows down to the tip of the tail. The tail also sports bands perpendicular to the dorsal stripe. The legs, both front and back, should also have bands. However, the leg bands do not need to flow evenly or be perfectly horizontal. At least one broken necklace should appear on the chest of the Egyptian Mau.

The Egyptian Mau’s spots do not need to make a pattern. They may be small and round, large and oblong, or any combination. Their spots should never make any tabby or mackerel pattern, and connected spots are undesirable. Silver and smoke Egyptian Maus should have black spots and stripes, whereas bronze Egyptian Maus should show dark brown markings. Often, the toes and ears are spotted as well. The ears may also have lynx tips without penalization.

Specific matings can produce kittens whose coats are either tarnished or cold. With Egyptian Maus, tarnished generally refers to a silver cat with areas of fur that are bronze in colouring. Cold is often used to describe a bronze Egyptian Mau whose bronze colouring is not as dark as desired. Cold bronze was once another known as another colour itself, called Pewter.

Egyptian Mau vs other spotted cats

Besides their unique background, the Egyptian Mau has several key physical differences that set them apart from other spotted cats. One of the most noticeable differences is the breed’s spotting requirement. The spots of an Egyptian Mau can be completely random and in all shapes and sizes; however, they should never have rosettes, marble, or striped pattern, which resembles some Bengals. 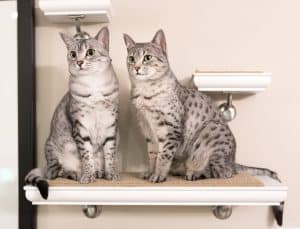 Another giveaway of the Egyptian Mau is their belly flap. The belly flap is only a desired trait in the Egyptian Mau and is considered a fault in most other spotted breeds. If still in doubt, the Mau’s almond-shaped eyes, even in width nose, and medium-sized ears should also help you determine what you’re looking at.

The Egyptian Mau is an elegant beauty that graced Ancient Egyptian art as early as 2200 B.C. Throughout most of the Ancient Egyptian timeline, these cats were seen as both loving companions to be treasured and valuable protectors to be honoured and revered.

Egyptian Maus were initially trained to hunt prey, such as birds and fish, and return the bounty to their humans. They were also taught to guard crops by keeping away small animals that would disturb them. Cats were held in such high regard that if anyone were to be caught killing a cat in this time, they would be immediately stoned to death for their crime.