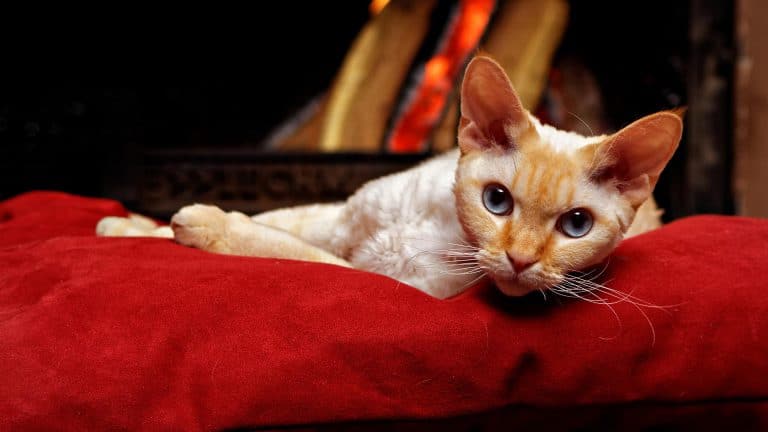 The character of the Devon Rex is remarkable! Devon Rex are alert and active, and shows a lively interest in their surroundings. They love to be with their humans, and enjoy playing fetch or other games. They are also extremely agile cats with an inquisitive nature and will explore every corner of their homes.

Devons Rex like dogs, follow their humans from room to room, inviting themselves along for every activity – preferably perched on a shoulder, lap, or wherever they can be closest to their people. Never wishing to left-out of any activity, Devon Rex owners find the breed very intelligent, obsessively affectionate, loyal and fun-loving.

The Devon Rex is a cat with attitude and purrsonality plus – a breed that is definitely not for the faint hearted!

The Devon Rex is a fine to medium build, small cat. Females weigh an average of 2-3 kilos when full grown, and males range from 3-4 kilos. Although it may look fragile, the Devon Rex is a sturdy, agile and very muscular breed.

Another striking feature of the Devon Rex is its coat, which varies greatly between individuals. Devon Rex have a short, rippling coat, which is either fairly loose with a slight wave in the fur, or tight with a definite kink. The coat is velvety soft, being mainly “down” fur -although there are a few guard hairs, which break the smoothness (these guard hairs are also softer than those found in other cats). 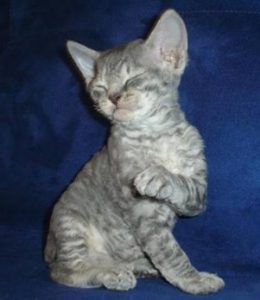 The Devon Rex distinctive soft, wavy coat comes in a variety of patterns and in colours, including pointed (si-rex), solid, shaded, tortoiseshell, calico, bi-colour, harlequin and smoke colours as well as the tabby pattern.

The Devon Rex is recognised and accepted for competition in all colours and patterns.

The Devon Rex is a low-maintenance, wash-and-wear companion! Occasionally the Devon Rex’s large ears require cleaning, but otherwise, a quick shampoo and towel dry (or even a wipe-down with a damp cloth) and a nail-trim is all the grooming most Devon Rex require.
Even though their body temperature is the same as other cats, many Devon Rex are surprisingly warm to the touch due to a lighter, less insulating coat. Not surprisingly, Devon Rex tend to be ‘heat seekers,’ so extra heat sources may be useful in winter.

Due to their rarity and outgoing nature, Devon Rex are best kept indoors. 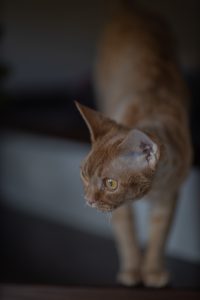 Despite popular myth, Devon Rex do shed (as does anything with hair), although their unique coat may make the shed hair less obtrusive than that of many cats. Devon Rex have also gained a dubious reputation as being “hypo-allergenic,” but this varies according to an individual’s personal allergies. While some people with animal allergies tolerate Devon Rex very well, anyone with allergy issues should arrange to handle a Devon Rex before considering acquiring one. More Reading: Hypoallergenic Cat Breeds

The Devon Rex didn’t settle into the unsuspecting laps of humans until 1960. The father of the Devon Rex breed, a feral, curly-coated tom, lived around an abandoned tin mine near Devonshire, England. He mated with a straight-coated calico female that produced a litter of kittens in the garden of cat fancier Beryl Cox. One of the kittens, a brownish-black male that Cox named Kirlee, had the same short, curly coat as his father. Breeders think that the calico female and the curly-coated male must have been related, since the Devon Rex gene that governs the curly coat is recessive and must be present in both parents to manifest in the offspring.

At first, Kirlee was thought to be related to the Cornish Rex. Subsequent matings between Kirlee and the cats of Cornish Rex breeder, Brian Stirling-Webb, resulted in only straight-coated offspring and it became clear that although Kirlee had curly hair, a new Rex gene had been discovered. Cox and Webb concluded that the two breeds were unrelated. The name Devon Rex was adopted for the new breed, and a breeding program was established. To this day, Devon Rex breeders have maintained the original look of the Devon Rex; all Devon Rex should be able to trace their ancestry back to Kirlee, the first Devon Rex.