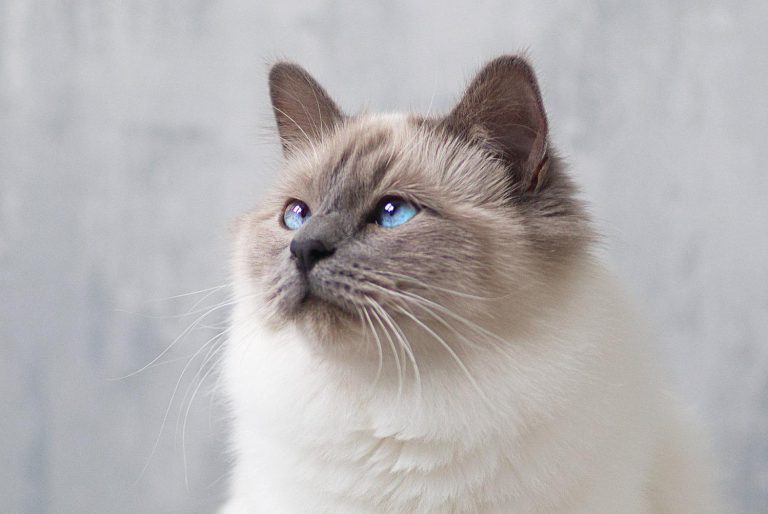 Affectionate, intelligent, playful cat. Males, in particular, are often very talkative. They are a placid cat and very loyal to their owners. Birmans are gentle and playful.

The Birman has point which means its face, ears, legs, tail and feet are a different color from the rest of its body. Kittens are born completely white and begin to show their points anywhere between 2 days and 2 weeks.

The Birman is a beautiful long hair cat with a medium to heavy body weight, brilliant blue eyes and a silky coat in a variety of different coloured points. Birmans have four white gloves on each of their feet.

The Birman cat is intelligent, affectionate, gentle, and tolerant. They are very playful and remain playful into old age.

The breed is very hardy and healthy. The Birman is very suited to families and children. They are a placid cat and very loyal to their owners. 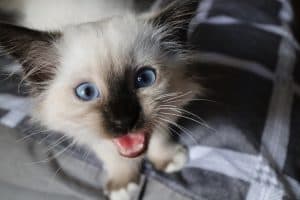 Birmans make wonderful pets for children. They are tolerant and playful and will join in games. If permitted they will sleep on the child’s bed and are always happy to see the young members of the household. Obviously small kittens and small children need supervision so that neither gets hurt while they are learning.

Birman coats are easy to care for because they do not mat although they still need regular grooming. 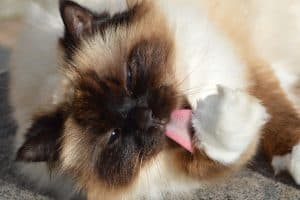 The reincarnation of souls and a deep love for priests is the basis for the legend of the Sacred Cats of Burma.

Once upon a time, before the days of Buddha, the Khmer people built beautiful temples to honour their gods – particularly the god Song-Hyo and the Goddess Tsun-Kyan-Kse. One of these temples was Loa-Tsun, built on the sides of Mount Lugh.

Within the temple was kept a gold figure of the goddess, with her sapphire eyes and dedicating his life to prayer lived the very holy Kittah Mun-Ha – and also 100 pure white cats with golden eyes.

One of these was Sinh, the companion of the old priest. One night Thai raiders attacked the temple, killing Mun-Ha as he knelt before the figure of the Goddess. Immediately the cat Sinh jumped onto the body of his master and faced the Goddess. The priest’s soul entered the cat, and as it did so the white hair of its body became golden and its eyes became sapphire-blue like the goddess. Its legs turned brown, except where the feet rested on its master and they remained white.

The transformation inspired the other priests to drive the raiders away and saved the temple from profanation and pillage. Seven days later, Sinh also died carrying with him into paradise the soul of Mun-Ha.

And when seven days later, the assembled priests consulted before the statue to decide on Mun-Ha’s successor, silently all the other white cats ran up, all dressed in gold with white gloves and with golden eyes transformed to sapphire blue.

Transformed just like Sinh they surrounded the youngest of the Kittahs and thus the reincarnated ancestors were designated by the will of the Goddess. From then on, the priests guarded their sacred cats, believing them to have custody of the souls of the priests.

When a priest dies his soul is transmigrated into the body of a cat and upon the cat’s death the priest’s soul’s transition into heaven has been accomplished.