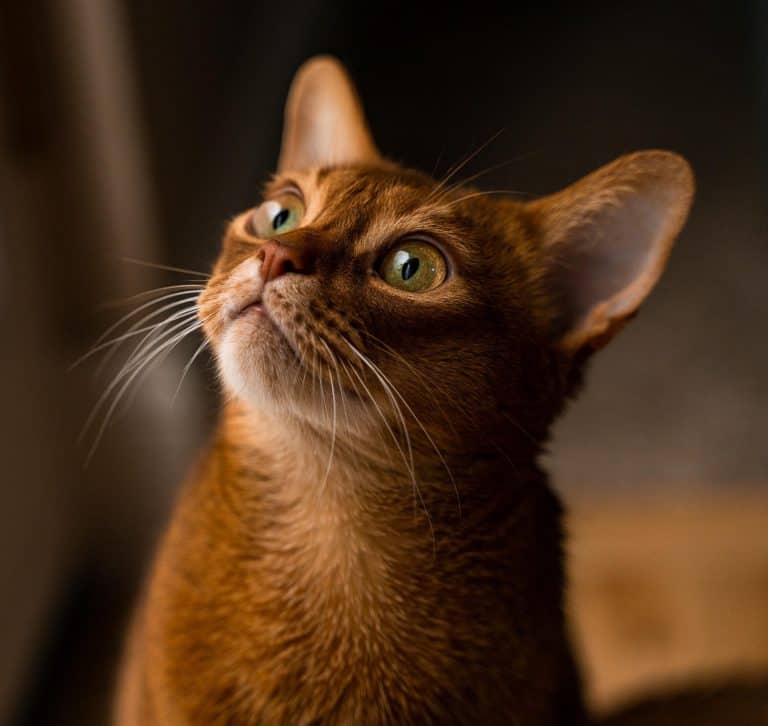 The Abyssinian is affectionate, intelligent, and very people orientated cat. She is extremely active and thrives on interaction and play.

The Abyssinian is an extremely beautiful and colourful cat with a distinct agouti ticked coat. It is this agouti ticking (flecking) that gives the Abyssinian this rather special “wild cat ” look.

It is of medium size, lithe, very regal in appearance, hard and muscular showing eager activity and lively interest in its surroundings. Watching an Abyssinian lope across the room invokes images of a wild hunting cat, swift and capable.

The overall impression of the ideal Abyssinian would be of foreign build, not as extreme as the Siamese not as rounded as the Burmese but somewhere in between.

The Abyssinian is an affectionate intelligent cat, very people orientated, extremely active and a cat that thrives on interaction and play.

They are not constant lap cats, rather, they need to know what you are doing; like to help you make a telephone call; read your newspaper or make your bed, in fact they insist on being included in all family activities as a right. Whatever it is, an Abyssinian has to be totally involved. 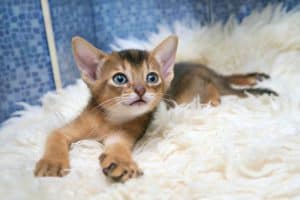 Abyssinians are not always ideal for every one so if this higher level of activity will annoy you then a quieter breed should be sought.

Abyssinians make good family pets but tend to bond with Adults and older children rather than young toddlers. Abyssinians are not vocal, having a small bell like voice to communicate.

They prefer and seek higher places to sit such as backs of chairs, refrigerators and scratching poles. They get on very well with dogs and will quickly teach the dog who is the boss.

Abyssinians can be taught to fetch and retrieve small objects and because of their dog like antics, they are often attractive to men who previously thought that they did not like cats. Once a relationship is formed there is no breed more loyal than an Abyssinian.

Expect to be greeted with enthusiasm and devote 10-15 minutes attention to your Abyssinian on your homecoming. Being “people” cats, they can become very lonely if left for long periods of time alone so it’s often wise to have two as company for each other.

Abyssinians are generally a healthy breed, and depending on their lifestyle will live well into their teens. As with all cats they should be kept indoors in order for them to avoid many of the contagious and fatal diseases easily transmitted from the stray population.

Vaccinations should always be kept up to date and routine checks should be made regularly. The first sign of any illness should be attended to promptly by a veterinarian.

Many felines are prone to gingivitis, as are some Abyssinians. An incorrect diet is often the main contributor, start by feeding kittens raw chicken wings and necks at a very early age. This will exercise the gums and prevent tartar from forming on the teeth. 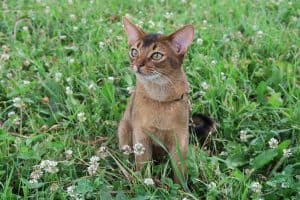 The kidney disorder “Renal Amyloidosis:” has been associated with the Abyssinian cat and is thought to be genetic. This disorder often results in kidney failure and the cat’s prognosis is often poor. This disease is also seen in many other breeds of cats but unfortunately, some veterinarians incorrectly label it as purely an Abyssinian disease.

Only a few breeding lines are likely to produce kittens with Renal Amyloidosis, so this should not deter the public from buying an otherwise relatively sound breed.

Responsible breeders will do their utmost to avoid perpetuating health problems, so it is important when purchasing a kitten to choose a reputable breeder and one with whom you can discuss all aspects of the Abyssinian including health matters.

Although many believe the Abyssinian to be direct descendent of the sacred cat of Egypt, the exact origin of the breed is obscure. The Abyssinian shape and distinctive coat however also bears a striking similarly to the African Wild cats.

Certainly, there is a strong resemblance between the modern Abyssinian and the cat depicted in ancient Egyptian bronzes, paintings and the agouti coated cats found buried in the tombs, with the lithe long body large ears and long tail.

The first registration of the breed appeared in English studbooks in 1896. The earliest identifiable Abyssinian can be found in the Leiden Museum in Holland. The label reads “domestica India”, indicating the origin to the same area.

More recent studies have indicated the coast of Indian Ocean between Singapore and Ceylon to be the “homeland” of the Abyssinian Tabby colour pattern – Abyssinians are one of the oldest breeds and they are possibly the closest to a natural breed of all the purebred cats in the world.