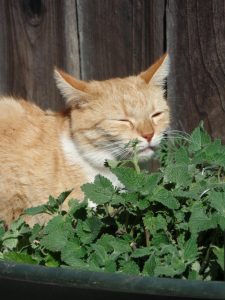 Why cats like Catnip? – Effects on Cats and Kittens 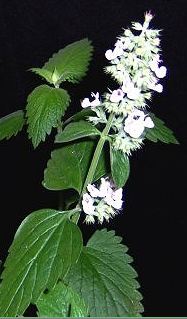 Catnip is a herb belonging to the mint family. Its botanical name is Nepeta cataria. It is sometimes referred to as catmint.

The odor of the plant smells faintly of mint.

Catnip is a perennial. Perennial is defined as a plant that lives for more than two years

The active ingredient in Catnip is an oil; Nepetalactone, which is found in the leaves of the plant.

What are the effects of Catnip on a Cat?

Some cat owners have described the affect of Catnip on their cat as getting ‘high’. Nepetalactone is said to have a hallucinogenic effect. The cat will often rub, lick, sniff and eat the catnip plant. After this contact the cat will often undergo short term behavioral changes. Catnip can affect different cats in different ways. Some of the more common effects are:

Does Catnip affect all Cats?

Catnip only affects about 50% of cats. The other 50% have no interest in it whatsoever.

It has no effect on very young kittens less than 12 weeks of age.

Why are some Cats affected by Catnip and others not?

It is believed to be genetic. Simply speaking, cats either have the gene which causes a response to catnip or they do not. In other words it is inherited.

Is it safe to give my cat Catnip?

Catnip is non toxic and non addictive. It is safe to eat, however, ingestion only, does not produce a reaction in cats. It is the smell of catnip that prompts a response.

Where do I get Catnip?

You can buy a Catnip plant at your local nursery. Or buy some catnip seeds and grow your own.

Catnip is also available in many other forms from your pet supply store. Some of the catnip products available include: dried catnip, catnip toys, catnip oil, catnip spray and catnip pillows.

Larger cats such as the bobcat, lynx, tiger and lion can also be affected by Catnip.

Other uses for Catnip

Nepetalactone the active ingredient in Catnip has been shown to have insect repellent properties. It seems to work well warding off mosquitoes and cockroaches.

In humans, catnip has claims to be useful in the treatment of colds and flu. Its sedative properties could also be useful in inducing sleep and calming the stomach which may relieve diarrhea and nausea. It has been used to treat colic and anxiety in children.